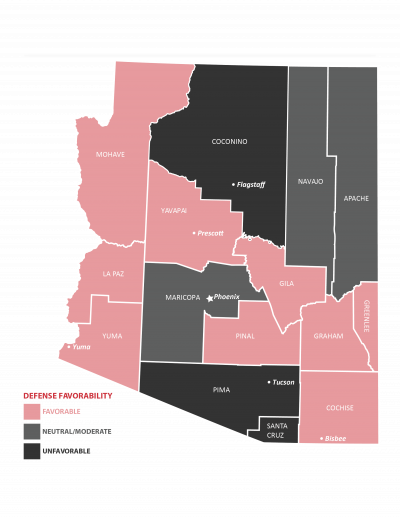 This resource demonstrates our general experience as to verdict results in each county, and outlines 15 points on the most common questions and issues in personal injury claims.

Punitive Damages: Punitive damages are awardable in the most egregious tort cases, involving outrageous and reprehensible conduct. A plaintiff may be entitled to punitive damages if the defendant acted maliciously, wantonly, or willfully. According to the current recommended jury instructions, a plaintiff must prove, by “clear and convincing evidence,” that the defendant acted with one or more of the following states of mind: (1) intended to cause injury; (2) was motivated by spite or ill will; (3) acted to serve his own interests, having reason to know and consciously disregarding a substantial risk that his conduct might significantly injure the rights of others; or (4) consciously pursued a course of conduct knowing that it created a substantial risk of significant harm to others.

Comparative Negligence: Arizona is a pure comparative fault and several liability jurisdiction, meaning each defendant is liable only for that amount of the plaintiff’s damages allocated to that defendant in direct proportion to the defendant’s percentage of fault. Three exceptions apply to allow joint liability: where defendants act in concert; where a person acts as an agent or servant of another; and where liability arises out of the FELA.

Assumption of the Risk: In all cases, this defense is a question of fact for the jury. Even if the jury finds that a plaintiff assumed the risk, it still has discretion to find for the plaintiff or the defendant, or assign percentages of fault to both.

Dram Shop Act: Applies to commercial vendors. The vendor can be sued by anyone, including the intoxicated individual, for injury, property damage, or death. It does not apply to a social host, so long as the person served is 21 years of age, or older.

Negligent Infliction of Emotional Distress: May be sought by: (1) a bystander who witnesses bodily injury to a closely related person and suffers mental anguish at the time of the accident from witnessing that injury; or (2) an individual who develops mental anguish from a threat to his or her personal security. In both instances, the individual must be within the zone of danger when the accident occurs and the mental anguish must manifest itself with physical injury. The damages must be caused by the emotional disturbance that occurred at the time of the accident, and not thereafter.

Collateral Source Rule: In general, a defendant may not introduce evidence that a plaintiff’s damages were paid by a collateral source (e.g., insurance), or that a plaintiff’s bills were satisfied by a reduced amount. However, evidence of collateral source payments is admissible in medical negligence cases, subject to the plaintiff’s right to introduce evidence of any liens against the plaintiff’s claim. The purpose of this exception is to prevent double recovery by medical malpractice plaintiffs. In all cases, a plaintiff must prove that billed charges are reasonable and customary in the community. The purpose of this rule is to prevent a tortfeasor from deriving any benefit from compensation or indemnity that an injured party has received from a collateral source.

Uninsured and Underinsured Motorist Coverage: A carrier is required to offer UM/UIM coverage in writing, in limits not less than bodily injury liability limits. Failure to make the offer results in inclusion of UM/UIM in the policy by operation of law.

Offer of Judgment: In cases not subject to arbitration, a plaintiff or defendant can make an offer of judgment at any time more than 30 days before a trial begins. If the case is assigned to arbitration, the offer of judgment must be made more than 25 days before the arbitration. If an offer is not accepted, and the offeree does not later obtain a more favorable judgment, the offeree must pay reasonable expert witness fees and double the taxable costs incurred by the offeror after making the offer. A plaintiff offeror may also recover prejudgment interest on unliquidated claims to accrue from the date of the offer.

Courts: Lawsuits filed in the Arizona superior courts are subject to mandatory arbitration if the amount in controversy is $50,000 or less (lower limits in some outlying counties). A party not satisfied with the arbitrator’s decision has a right to appeal the matter for a trial de novo in superior court. However, there are sanctions for failing to obtain at least a 23% more favorable outcome in the superior court.

Settlement of Wrongful Death and Minor Cases: A minor lacks capacity to enter into a binding contract, including settlement agreements. Therefore, obtaining a binding settlement of a minor’s claim requires court approval, regardless of the amount of the settlement. To do otherwise risks the possibility that the minor can later reopen the claim.

*This material is intended to provide a general overview of defense favorability in each County in Arizona, and should not be relied upon as the sole source of current information, nor substituted for competent professional legal advice as applied to any particular situation. Please contact an attorney at JSH if you have any questions.