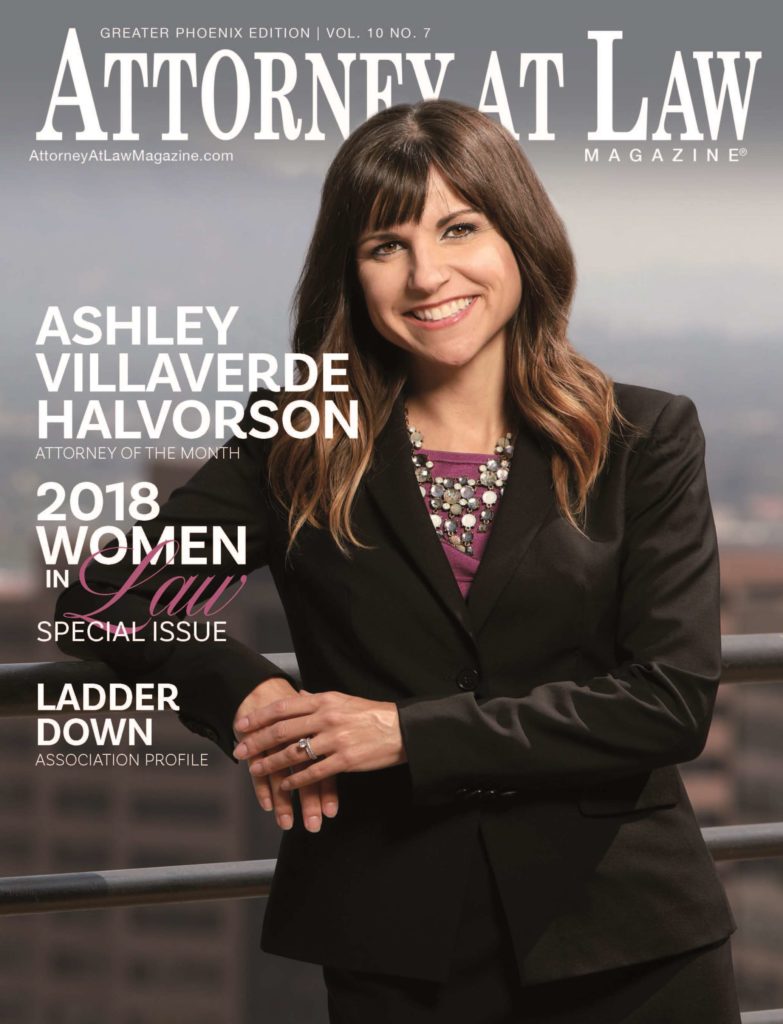 Described by her parents as having been “a very persuasive child,” Ashley Villaverde Halvorson has proven to be not just convincing in the courtroom, but an accomplished attorney, firm partner, bar association president and mother of two.

While any of these achievements stands on its own, what is most impressive is that Halvorson has managed to not just maintain her balance, but to glide through her responsibilities with grace. This dedicated champion of education and diversity deftly moves from office to home to board meetings, giving each her full attention.

An Arizona native, Halvorson’s roots extend to the Midwest and to the south. “My father’s side of the family is of Mexican descent,” she says. “He came from a migrant, working-class background – copper mines and citrus fields. My mom is from Illinois and met my dad while they were both working in a restaurant in Phoenix.”

Upon leaving the restaurant industry, her father took an entry-level position with the City of Phoenix, primarily because the family needed health insurance. He eventually rose to Director of Operations for Valley Metro, after attending night school to obtain his bachelor’s degree.

Industrious and unafraid of hard work, her parents placed great emphasis on education. “We were all raised with a strong work ethic and a sharp focus on higher education,” she says. “This led me to where I am as far as my career and involvement with Los Abogados.”

FISH OUT OF WATER
As with many parents, the Villaverdes were ready to make virtually any sacrifice to ensure the future of their daughters. “A real turning point for our family was when my mom insisted we move across town to access a better public school district. It was a tremendous financial stretch for my parents, but they both felt it was well-worth the sacrifice and the longer hours.”

Today, in addition to being a partner at Jones, Skelton & Hochuli PLC (JS&H), Halvorson is the president of Los Abogados. She was introduced to Los Abogados when she was awarded the Hon. Valdemar A. Cordova scholarship, which is given to law students committed to serving the Latino community. She has been a member since 2010, serving as vice president, secretary, and as chair of various committees.

Los Abogados is dedicated to enhancing the legal profession by promoting diversity, education, and advocacy, particularly in and for the Latino community. Its efforts include supporting Latino students and attorneys, and providing scholarships to ease the financial burden of entering the legal profession – a hurdle familiar to Halvorson. “We are much more than a professional association,” Halvorson says.

“I am proud that Los Abogados is dedicated to the advancement Latinas. This year, we formed a standing Latina Committee, and we continue to support the Latina Mentorship Project.” The association’s positive impact has not gone unnoticed this year. It was awarded both the State Bar of Arizona Diversity and Inclusion Award and the Hispanic National Bar Association Affiliate of the Year Award.

“He told me that with my excellent grades I should consider law school or a post-graduate education of some sort,” she says. “I was thinking, ‘No way, I’m done!’”

In retrospect, she admits she had always viewed the college degree as the pinnacle, not realizing she could reach higher, especially as she had not been exposed to what that might look like or what it would take to get there.

But as fate would have it, Halvorson was lined up for a summer internship in Washington, D.C. with now-retired Congressman Ed Pastor. It happened to be “a slow year for the minority party” so the Congressman had time to “pester” her to sign up for an LSAT course and apply to law school. This turned out to be one of the most pivotal summers of her young life.

“My experience interning for Rep. Ed Pastor in Washington, D.C., was my first exposure to politics, public service and the law. I pursued a legal degree as a result of the experience and encouragement I received that summer,” she says. “It was just enough to prompt me to take the LSAT and apply to law school after returning home.”

To further round out her law school application, she completed another internship with then-Governor Janet Napolitano, while working nights in the restaurant.

Law school proved to be an education in more than one way. Halvorson quickly realized just what factors truly are at play in determining one’s future. “I felt like a fish out of water,” she says, “as though I didn’t belong because I didn’t come from the ‘right’ background. But then, I had felt the same way when we first moved ‘across the tracks’ when I was younger, so I was kind of used to that.

“I learned pretty quickly that the quality of your education and the opportunities available to you can be dependent on where you live, and of course where you are on the socioeconomic spectrum,” she continues. “This disparity leads to a lack of diversity in the law schools, the bar, and on the bench, leading to poorer outcomes for social justice and our community’s faith in the legal system, and even for business.”

SHARING A LIFELINE
Halvorson explained that professional mentors and colleagues played a critical role in her development as a lawyer, and she sees these relationships as one way to bridge the gap of educational disparity. Now, by supporting and mentoring students and young lawyers, she hopes to offer a lifeline to those who also come from diverse backgrounds.

“We’re trying to level the playing field, and hopefully making up for advantages some may have missed out on,” says Halvorson. “Giving back also gives me the opportunity to honor my family for the countless sacrifices they made, and to show gratitude to those who have supported me along the way.”

Her passion is not confined to Los Abogados. Halvorson serves on JS&H’s Mentorship Committee, Diversity Committee and chairs its diversity legal writing internship program. She’s also a 2015 alum of Ladder Down, a professional development program for women.

“JS&H has been a tremendous supporter of Los Abogados and Ladder Down, and has been a welcoming professional home. My mentor, and long-time firm leader, Donald L. Myles Jr., has always been a champion for diversity, which is so important in maintaining an inclusive firm culture. I am fortunate he gave me opportunities to gain trial court experience very early in my career.”

MOM LIFE
When asked how she juggles so many responsibilities, she smiled. “I guess it’s what I’m accustomed to,” she says. “All through college and law school I worked, so this is just a different kind of busy.

“We have a great support system,” she continues. “My three sisters and mom live within a mile of us, and my husband’s folks are also in Phoenix, so we’re very fortunate. I don’t think you can ever really ‘balance’ it or ‘have it all’ as they say, you just do your best, keep your head above water, and most importantly, don’t beat yourself up about what hasn’t been done at the end of the day.”

She and husband Mike Halvorson have two young sons, Nicholas “Nico,” who is 2 years old, and 5-month-old, Lucas.

Mike is also a partner at JS&H, so dinner table conversations frequently turn to current cases. “We bounce ideas off one another,” she says. “It’s helpful to have someone who understands the work and the accompanying stress. And someone who cares as much if not more about my success as he does his own.”

While her plate is nearly overflowing, Halvorson is already anticipating where to focus her energies in the future. “Both of my parents have disabilities,” she says. “I hope that someday I can contribute to those causes in some meaningful way.”