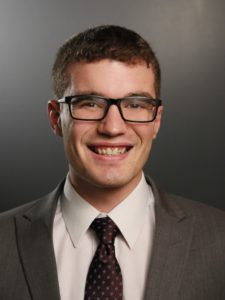 PHOENIX, AZ (April 21, 2020) Jones, Skelton & Hochuli, PLC congratulates ASU law student Nicholas Walter as recipient of the 2019-2020 Bill Jones / ABOTA Trial Advocacy Award. Since the passing of William R. Jones, Jr. in 2017, ABOTA (American Board of Trial Advocates) has sponsored this award in his name to recognize law students for academic achievement and demonstrated commitment to the art of trial advocacy. Jones, Skelton & Hochuli is pleased match this year’s award.

A long-time member of ABOTA, William Jones tried more than 250 civil jury cases during his 54-year career. He lived his life dedicated to his belief in his “responsibility as a public servant to protect, shape, nourish, and grow the justice system for all citizens.” As Bill once put it, “contributing back to the profession and to society is a sacred obligation that goes hand-in-hand with the privilege of being a member of this honorable profession.”

Nicholas Walter is a third-year law student at ASU’s Sandra Day O’Connor College of Law, where he has focused his efforts on becoming a trial lawyer. As a result, Nick will receive the Trial Advocacy Certificate upon graduation in May. He has also earned a CALI Award for Excellence for the Prosecution Clinic, and has served as an editor on four law journals. Actively pursuing all trial advocacy opportunities, Nick has competed in six internal moot court competitions, served as President of the Moot Court Board, is the Advocate General for the Trial Advocacy Group, and has been an advocate on the ASU Law Mock Trial Team. In addition, Nick’s externship experience has focused on litigation and trial, including his externship with the Mesa City Prosecutor’s Office.

About the American Board of Trial Advocates (ABOTA):

ABOTA is a national association of experienced trial lawyers and judges. Created in 1958, ABOTA and its members are dedicated to the preservation and promotion of the civil jury trial right provided by the Seventh Amendment to our United States Constitution. JSH boasts ten members of ABOTA, the most members from any one law firm in the entire state of Arizona.