Mike’s diverse practice focuses on trucking and transportation defense, including commercial cargo and property loss, as well as in the areas of motor vehicle liability, product liability, dram shop and premises liability defense.

This is ambiguous writing, at best. Why the drafters of this statute chose to write it as a sphynxian riddle is as unclear as the language itself, but that’s what we’re left with. In distilled terms, this statute states that auto insurers must “be willing to provide” UIM coverage to their insureds, and they must “bring the availability of [UIM] coverage” to their insureds’ attention in writing. That’s it. Auto insurers’ obligations under A.R.S. § 20-259.01(B) are narrow. They are required only to “‘make available’ UIM insurance and communicate that availability in a written notice” to their insureds. If, after being made aware of UIM coverage, an insured “affirmatively requests” UIM coverage, it must be added to their policy. If the insured is made aware of UIM coverage and does not “affirmatively request” such coverage, it does not need to be added to theirpolicy. But if the auto insurer does not offer UIM coverage to its insured, the insured is afforded UIM coverage as a matter of law. Accordingly, this statute’s requirements—as announced by the Arizona courts—are rather straightforward. The problem is that carriers too often insert unnecessary complications into their UIM notices. On behalf of our client, a national auto insurer, we recently authored a coverage opinion in which the carrier had provided the insured the following UIM form: 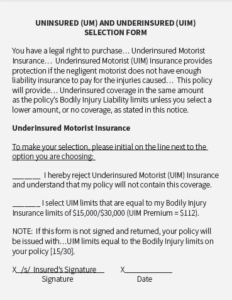 Most carriers use forms that are very similar to this. The problem in our case was that the insured did not initial next to either the “reject” or “select” options; he merely signed his name on the line below. And because the selection form said, “This policy will provide…Underinsured coverage…unless you select a lower amount, or no coverage, as stated in this notice,” it was our opinion that the insured was entitled to UIM coverage, even though he had been paying the non-UIM premiums under his policy. The carrier lost money it should not have lost, solely due to the drafting of the form. The message to be taken from this situation is this: keep it simple. When it comes to “offer[ing]” UIM coverage under § 20-259.01, auto insurers have very limited obligations. They need only carry UIM insurance and make their insureds aware of the availability of this UIM coverage with a written notice. For example, if an insurer sent its insureds a hand-written postcard that read: “Happy Holidays! (By the way, [carrier name] offers underinsured motorist coverage. Call your agent for additional information.),” it likely would have satisfied its statutory obligations under § 20-259.01(B).

The Arizona Legislature provides auto insurers an iron-clad method of demonstrating compliance with § 20-259.01. If the insurer has its UIM notice pre-approved by the Arizona Department of Insurance (ADOI), it is in compliance with § 20-259.01(B). Additionally, insurers are not required to use ADOI-approved forms,12 and insurers can still easily satisfy their statutory obligations by providing their insureds with their own written notice of the availability of UIM coverage. Remember, don’t overthink your underinsurance notices. Keep it simple and straightforward.